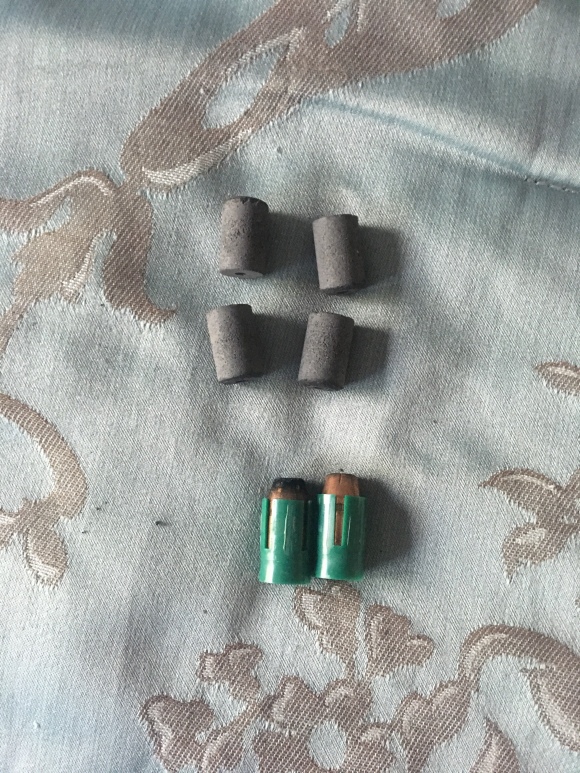 Had an experience that just shows the Man upstairs (God you dorks, not your upstairs neighbor) has ways to protect us every day even though we have no idea he is doing so.

Here’s how the picture attached came about, Peach and I have a son (we have two sons to be precise, but since the other wasn’t involved, I only mentioned the one {if I didn’t clarify all God’s available armor couldn’t protect me from Peach reminding me we have two} as the conversation with him led to this.

I like to hunt, some find this horrible and that’s ok, most people have several opinions that don’t match mine. My son (the one I was originally talking about) and I were discussing the possibility of getting together and going hunting next December someplace we had never been. Research led us to decide a muzzle loader hunt would probably suit us best. Now those who are not gun knowledgeable are going “a what Hunt?” and that’s an appropriate question if you’re not gun savvy. So here is the easy version, a muzzle loading gun (black powder gun, smoke pole, musket, and a host of others) is loaded from the muzzle end (the end the bullet comes out) you put an appropriate amount of black powder (or in my case a pellet of synthetic gunpowder) in the muzzle, a projectile (sometimes wrapped in a patch sometimes in a plastic sleeve called a sabot) and push them down the barrel as far as they will go with a rod. The gun is then fitted with a percussion cap or a “shotgun” primer, cocked and fired (this is overly simplified but should give you an idea).

To unload my style muzzle loader, you can shoot it (which means cleaning it after) or you can take off the primer cap or shotgun primer, remove the breech plug, take the same rod u pushed the round and pellets in with and push them farther in till they fall out the open breech, thereby rendering the gun safe. If I plan to hunt later that day or the next morning I will sometimes just remover the primer cap, put the gun in the case until the next day, and so on and so on.

Anyways, this hunting decision being made convinced me to pull out the old “smoke pole” and give it the once over just because. Now I am pretty gun safe but even I do screw up from time to time and freely admit this fact. I haven’t hunted with the old muzzle loader in two years, and it’s been in a hard case in the safe nice and comfy. Once I get the gun out and dusted off I pull the breech plug out and look in the barrel (black powder and pyrodex synthetic pellets are highly corrosive) to see if there were signs of rust or corrosion. Imagine my surprise, I could not see a thing, it was pitch black. Point barrel at bright light coming in window, still black…hmmmm. Whip out ye old push rod and insert into muzzle and out pops two pellets and a bullet and sabot, Ha! just forgot to unload it I suppose, stupid but does happen, like I said I do make mistakes like all humans, and God keeps pushing us back on track. Now with that done I pull the rod out and look down the barrel, still black and I’m totally confused, I put the rod in, and push out two more pellets and another bullet in a sabot.

You could have pushed me over with a feather (not an easy feat I’m not a little guy) from the stunned sensation I had. Some how I had loaded one complete load on top of another during the last time I used it to hunt. Had no idea, but God did, his intervention then by not letting me see any animal worth shooting, and then in not letting me shoot it to unload it at the end of the season, and finally in making me want to give it a look when I did, all equaled to me not blowing the gun up in my face (Peach wouldn’t be happy with me coming home with a barrel stuck in my face).

You can say what you want, luck, fate, whatever, but to me it was only the hand of God and his Armor of protection that helped me avert a bad day.

Hi!! Thanks for dropping in! We are just a couple of high school sweethearts married 36+ years, who love Jesus, each other, life, our family, our country, traveling, taking pictures, teaching people about guns, books, movies, music, British murder mysteries, and cooking! We have a little bit of everything going on! Come on in!

One reply on “God’s Armor over Me?”